"We are going to see economic data for the second quarter that is worse than any data we have seen for the economy" - Federal Reserve Chairman Jerome Powell, 4/29/20

With all of the negative economic data coming out at the same time that the market is up 35% from its March lows, it's difficult to know what's going on underneath the market. Millions of Americans are joining the ranks of the unemployed while the Federal Reserve is outright (and illegally, more on that next time) buying up secondary market securities tied to corporate bonds. Please read the following to get an idea of where markets may be headed in the future.

The following chart is of the DOW Jones Industrial Average going back to the year 2000. The index has formed what is commonly referred to as a "megaphone pattern". This expanding triangle is often seen at major turning points in the market. As of now we view this pattern as "corrective" in the sense that the bull market since 2009 remains intact, however the likelihood of a revisiting of the March lows is high considering the volatility and volume that took place near those lows. Price almost entered our "long-term accumulation zone" (green oval). Look for price to continue lower to retest the March lows. 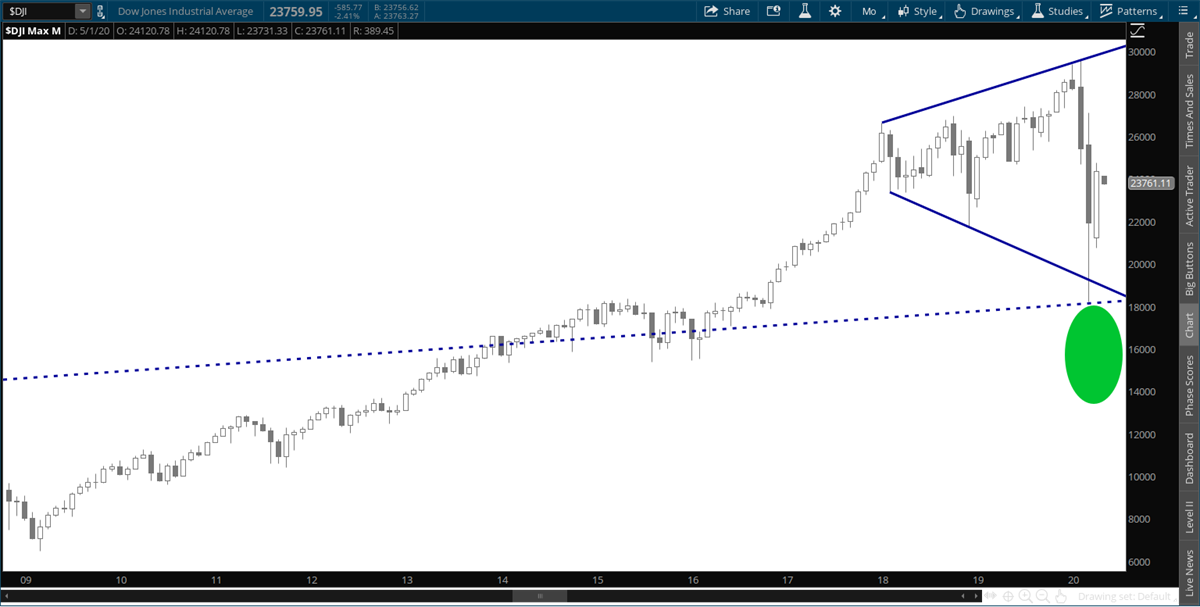 The following monthly chart of the NASDAQ composite shows that while we were not surprised at the location of the recent top back in February, we were surprised at the speed of the decline. The tech sector has shown some relative strength versus other sectors, but we believe there to be unfinished business on the downside to form a more sustainable bottom. 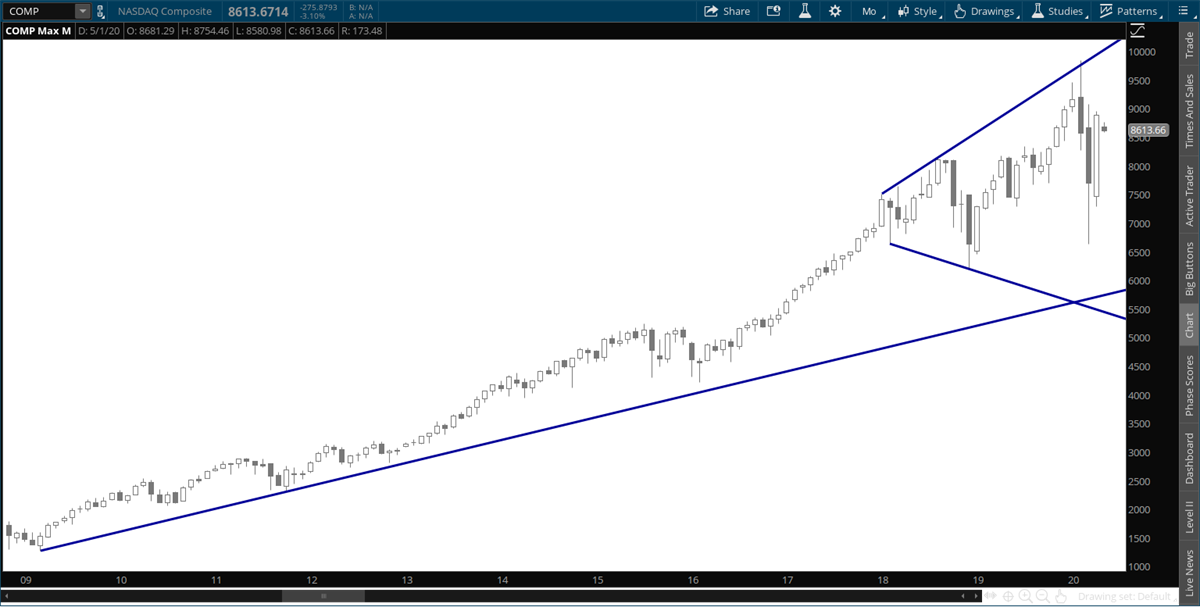 The small cap sector has suffered some of the most damage from the recent market volatility, under-performing the market as a whole. However, we also view this index as the most "developed" in terms of its correction since the 2009 low. We believe significant value is approaching for many small cap stocks, but similarly to the other indexes, a retest of the recent low is likely first to further weed out the weaker companies within the index. However, note that price for this index has already entered our long-term accumulation zone (green oval). 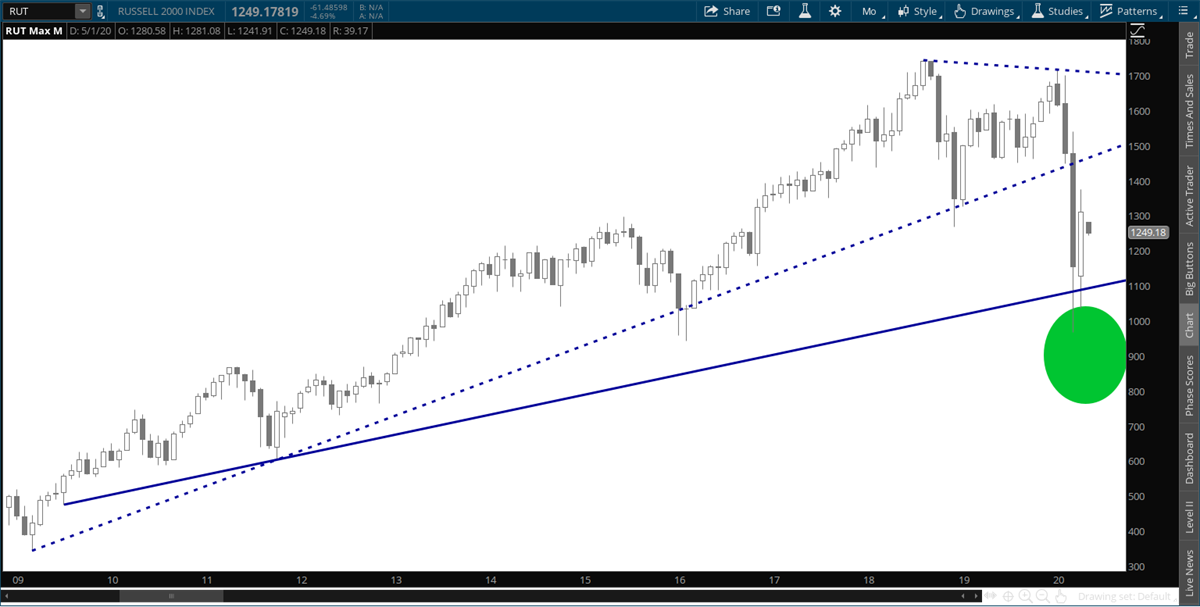 The VIX index, often referred to as "the fear index", broke out of a long-term downtrend set by the market crashes of 1987 and 2008. When the market declines, volatility rises. With this breakout in the VIX, we now expect market volatility to rise considerably, likely higher than the level set at the March 2020 market low. Because of this, we can't yet say the market has bottomed, but historic market lows coincide with historic spikes in the VIX. Our upside target for the VIX is somewhere between 105-140 (red oval). This may seem like a "wild" prediction, but another market decline to retest the March lows could bring about a rise in volatility to somewhere near these levels. We will be watching the VIX carefully for signs of a top in volatility (market bottom). 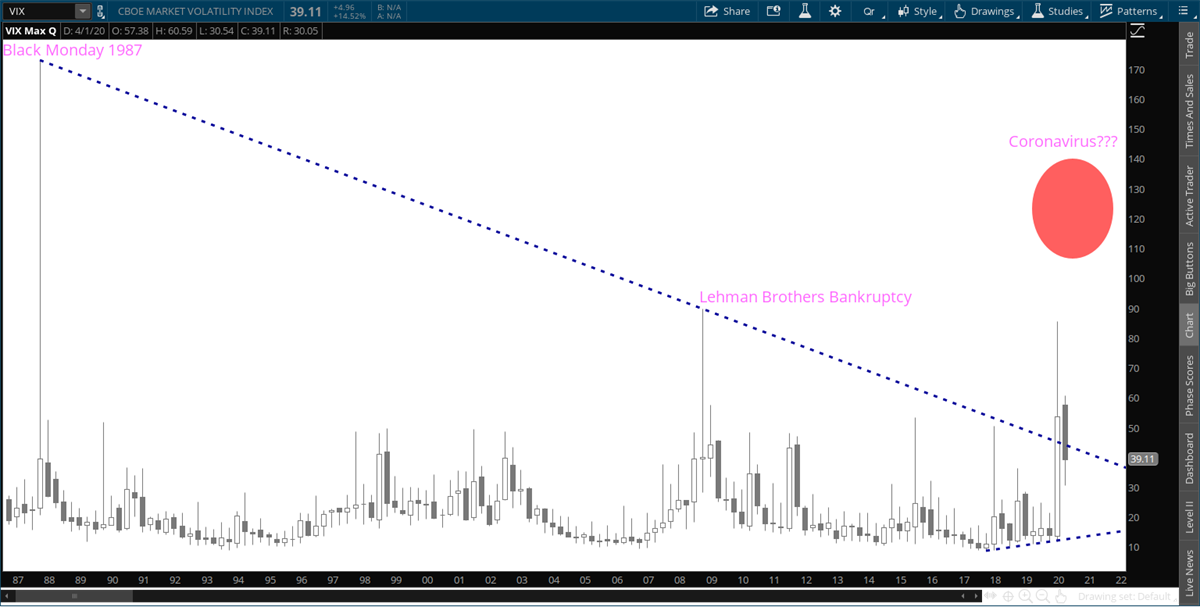 We view the decline since the February top as unlikely to be finished on the downside, but expect the next low to build a more sustainable long-term bottom.